- A web log to facilitate the understanding of the activities of the Niger Delta Basin Development Authority and its linkages with other national institutions. Friends of the Authority can keep abreast of developments in the Authority's mandate area.

The Niger Delta Basin Development Authority is  a service-oriented organization that is positioned  to meet the  water requirements of stakeholders in the most satisfactory  and cost-efficient manner, while ensuring good quality and sanitation and paying adequate attention to the preservation of the ecosystem, using proven technology and a well-motivated workforce.
VISION:
The vision of the NDBDA is in consonance with that of the Federal Ministry of Water Resources i.e to harness efficiently and effectively the nation's water resources for multi-purpose uses in an integrated and sustainable manner to meet present and future needs. - particularly as it affects the Authority’s area of jurisdiction (Niger Delta Basin).
VALUES
Our core values remain
-        Customers/stakeholders satisfaction
-        Provision of high quality of water and sanitation
-        Integrity; and
-        Commitment to service
LIST OF OUR CUSTOMERS
The service rendered impact on the lives of citizens particularly Nigerians living in the core Niger Delta areas of Rivers, Delta and Bayelsa States.
INTRA OR MINISTERIAL DEPARTMENT/AGENCY CUSTOMERS
Federal Ministry of Water Resources (our parent ministry)
Members of staff of Niger Delta Basin Development Authority
INTER-MINISTERIAL/GOVERNMENT CUSTOMERS
Ministry, Department and Agency of Federal Government
National Assembly, the Judiciary, State Government and Local Government Authorities.


PERFORMANCE TARGETS/CUSTOMER EXPECTATION
Historical background to the  River Basin Development Authorities
The 1958 Nigeria Constitutional Conference agreed that a Niger Delta Development Board should be established, and provision for its establishment was made in the Nigeria (Constitution) (Amendment No. 2) Order in Council, 1959.
Since the colonial era, some policies and programmes within national development plans have been formulated to address the minority status, agitations and perceived marginalization of the people of the delta.
But the recurring feeling in the region is that it is often pushed aside within the Nigerian Federation. This is particularly true for minority ethnic groups. The first major attempt to address these grievances was in 1957, when the colonial administration set up the Willink’s Commission of Inquiry to investigate the fears of minorities and how to allay them. The Commission reported in 1958 that “the needs of those who live in the creeks and swamps of the Niger Delta are very different from those of the interior".
The Commission also noted that it is not easy for a government or legislature operating from the inland to concern itself or even fully understand the problems of a territory where communications are so difficult, building so expensive and education so scanty are so a country which is unlikely ever to be developed. Perhaps more importantly the commission concluded a feeling of neglect and a lack of understanding was widespread - a case has been made for special treatment of this area. This is a matter that requires special effort because (the area) is poor, backward and neglected. That conclusion is as true in the Niger Delta today as it was in 1957. Be that as it may, the immediate post-independence Government eventually responded to the Willink’s Report by setting up the Niger Delta Development Board (NDDB) in 1961. 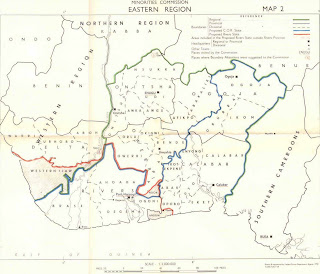 The NDDB could not solve the problems of the Niger Delta enunciated in the Willink’s Report.

This blog in any language